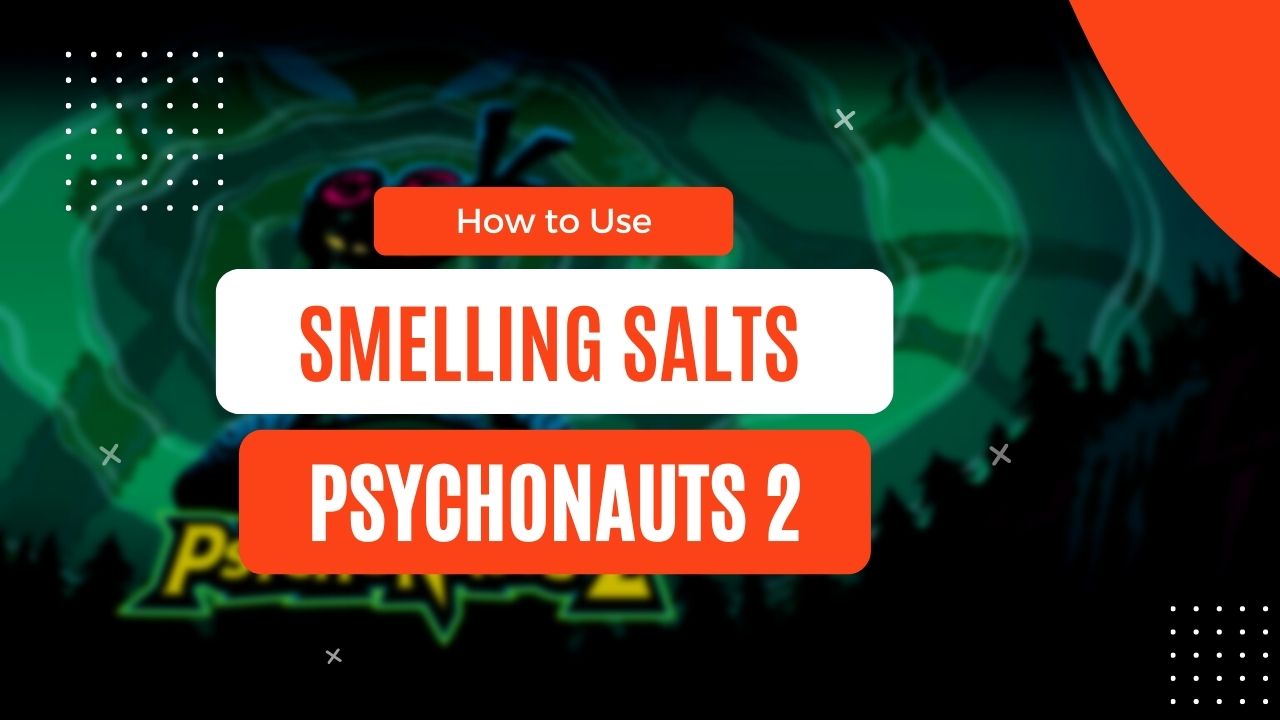 Psychonauts 2 is known for containing plenty of items and collectables that are unique to the game and have unique uses as you move through the story. Raz uses most of these items to find his way through all the different mindscapes he enters as he tries to fix Ford Crueller’s mind and uphold the Psychonauts’ mission.

The smelling salts are one such item that was introduced in the first Psychonauts game which essentially means that players who’ve played the first game should know exactly what this item does.

However, there’s no need to worry even if you’ve jumped straight into the second game without playing the first one as we’ll be explaining exactly what these smelling salts are, what they’re used for and how to use them while playing the game.

So, without any further ado, let’s get straight into it and learn everything we can about these smelling salts.

What are Smelling Salts in Psychonauts 2

Players of the game probably know by now that for Razputin to enter someone’s mind, he has to separate and transmit his astral projection into each mindscape.

Well, in Psychonauts and Psychonauts 2 the smelling salts are actually a golden container filled with a horrid material that when cracked open emits a disgusting smell that causes Razputin’s astral projection to return from the mindscape it’s currently in into the real world.

In layman’s terms, this item can be used to allow the player to take a break from tackling the challenges of the brain they’re currently in and escape into the real world.

Like almost every other game that ever existed, Psychonauts 2 has its fair share of flaws that most people look past due to the game’s gripping story and enjoyable gameplay mechanics. Its most noticeable flaw though is probably how poorly the smelling salts were introduced and explained as it left many players confused and unsure of how to use the item when the time comes.

Maybe the game devs thought the players would already know about the item due to their prior knowledge about the first Psychonauts. Nevertheless, to fix their mistake we’re going to tell you the exact process of how you can use these smelling salts to exit the brain you’re currently in and enter the real world.

Once you’ve reached the right point in the story and have access to the smelling salts all you have to do is access the menu. Go to the options settings from this menu and if you’ve smelling salts in your inventory you’ll see an exit brain option at the bottom of the options menu.

Selecting that option will lead to Raz breaking open the smelling salts and inhaling to exit the brain he’s in.

The Advantages of Using Smelling Salts

As you can probably imagine, being able to exit and enter a brain will certainly have its perks in Psychonauts 2. Not only is it great for the player playing the game as he/she can exit the mindscape they’re in whenever they feel tired or uninterested, but it also comes in handy when you’re replaying levels and just wants a specific achievement or collectable from that level.

The greatest perk of using the smelling salts by far though is the fact that after using the item if you return back to the same level, you’ll start from the most recent checkpoint instead of the very beginning of the level. This allows players to jump right back in and continue playing from the same point they left off on.

Having the option of returning back to the same checkpoint is also great for a player’s mental health as no player has to force themself into completing the level they’re on just so that they don’t lose their progress and have to start back from scratch when they return.

Which can eventually lead to players directing their hate towards the game itself due to the stress they feel while playing it.

When Do You Get Access to the Smelling Salts in the Story?

Unlike the first Psychonauts, the player isn’t presented with the smelling salts at the beginning of the game as the story progresses linearly up to Hollis’ hot streak which means the game’s not the open world at that point.

Right after that specific chapter of the game, you’ll meet Sasha Nein, a fellow psychonauts agent, who will hand you the smelling salts so that you can exit any brain that you’re in whenever you want. This also marks the point when the game turns into an open-world game and the side quests start popping up right after this interaction.

So, if you’re a new player who doesn’t yet see an option to escape the brain you’re in, then chances are that you haven’t reached that specific point in the story.

So, there you have it, folks, that’s all you need to know about smelling salts and how to use them to exit any mindscape or brain you’re in and enter the real world. To reiterate once again, there are a few things you need to be aware of before you decide to use these smelling salts.

Firstly, players should know that you won’t have access to this item until after the Hollis’ hot streak chapter which means you’ll have to brave through the game to the point where you meet your fellow psychonauts agent Sasha Nein. Also, keep in mind the one rule related to using these smelling salts. This basically entails that if you use this item you’ll immediately be pulled out of any brain that you’re in and on your return, you’ll be able to start from the most recent checkpoint. All in all, the importance of smelling salts in Psychonauts 2 cannot be overlooked as it gives each player that much-needed rest from tackling the challenges of the world they’re in. And gives them a chance to reorient themselves and come back to the level with a clear mind and beat it once and for all.

How to get through Mail Slots in Psychonauts 2