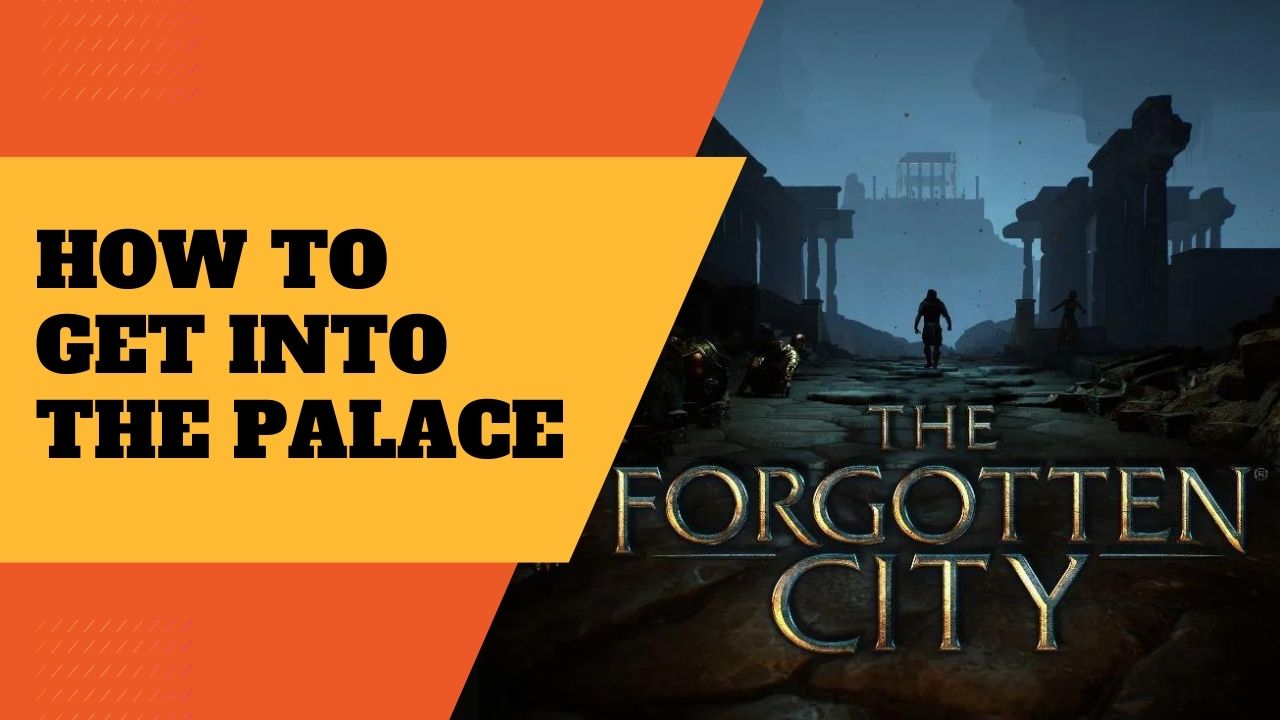 Games rarely let you explore their maps entirely and figure out all their secrets. Thankfully though the forgotten city is an exception to this rule. The palace is an area of the city that’s long been hinted at in the game of having shocking secrets and dangerous mysteries.

Fans of the game will be happy to know that the little tidbits of information you receive about the palace aren’t useless as there is a way to get inside and explore the place for yourself. In fact it’s quite essential to the story of the game and unlocks multiple endings.

Therefore, seeing as this matter needs special attention, we’ll take a look at how to get in, what you’ll find once you get inside and what secrets the palace houses.

How to Get into the Palace in The Forgotten City

To help the readers fully understand, I have broken down the entire process into a bunch of steps. Also keep in mind that through this process you’ll be completing the “Behind Closed Doors” and “The Gilding” quests which later on tie into the “Thorn in the Paw” quest.

Step #1: Join Desius’ Business Venture to get the Golden Bow

People who’ve logged in some hours in the forgotten city know exactly how crafty of a character Desius is. Still though, players will have to find a way to tackle his craftiness and interact with him because he holds the proverbial key to getting into the palace, the golden bow.

However, there’s no point in talking to him if you don’t have the wooden bow on you which is acquired after dealing with the assassin in the beginning of the game.

Unfortunately, defeating the assassin is a quest of its own which you’ll have to manage on your own or find another guide to help you in accomplishing it.

Now, before you go talk to Desius it would be wise of you to first explore the entrance of the palace, where you’ll find Naevia’s note which explains how she managed to lock herself in the palace. And you’ll also hear some whispers telling you to acquire the golden bow from Desius.

You can find Desius in the main marketplace and start talking to him. While you’re conversing with him Desius will propose his “Business Venture” at which point you’ll have to ask him to continue speaking and not let the conversation drop off at any point.

Doing this is relatively easy and after a point in the conversation Desius will tell you the general plan on how to acquire the golden bow which entails visiting the goddess Diana’s shrine.

The process of getting the golden bow is easy enough all you need to do is extinguish the lit torches and then aim your wooden bow on the golden bow to swap it for your bow.

We mentioned before how dangerous of a character Desius is and he proves us right when he locks the player behind the shrine’s doors after you’ve acquired the golden bow. Unsurprisingly, Desius wants to go into business for himself and will ask you to agree to hand over the bow to him. At which point he’ll open the shrine’s doors and let you go free.

Absolutely do not do this because the number one rule of video games is that there’s always another way. At some point in the conversation Desius will threaten you with the hornets’ nest in the middle of the room but little does he know that your escape also depends on using this same nest.

All you have to do at this point is shoot the nest with your bow which will promptly turn it to gold allowing it to fall through the floor of the shrine, creating a hole that you can jump into in the process.

Step #3: Escaping from the Tunnels

After you fall into the hole, you’ll find yourself in a maze of tunnels that eventually lead into the palace. Navigating these tunnels out and into the palace is not a particularly tricky task if you listen closely to the whispers and use your earlier experience with the hornets’ nest.

Did you get how to do it yet? No? Well there’s no shame in that, so allow us to tell you instead. The trick is to shoot the bits of algae in the water and the green vines with your bow and turn them into gold to traverse them and cross into the next section of the tunnel.

Keep in mind though that to accomplish this task you’ll need plenty of arrows which you can find in multiple chests and quivers spread out in the tunnels.

You’ll find most of them under the feet of some statues so keep an eye out for them. To finally get into the palace you’ll need to shoot some green vines growing upwards and into the palace to turn them into gold and climb them all the way up.

Step #4: Entering the Palace and Dealing with Peeled Statues

You are now free to explore the palace but beware there are a number of enemies lurking in the shadows waiting to attack you. After you walk through the first set of doors the quest “behind closed doors” will start automatically which ties into “the gilding” quest that you were on currently.

As you walk into the first room, maintain the practice of searching and looting all the chests to find arrows as they are the only way you’ll be able to successfully navigate and defeat all enemies in the palace.

Once you get into the palace, the path is relatively straight forwards and goes in a straight line into the many rooms of the palace.

However, once you leave the first room and cross the hallway immediately after it you’ll get attacked by a peeled statue, the only enemies you’ll find in the palace.

These statues used to be all gold but have recently had the gold peeled off their skin making them somewhat sentient and aggressive.

The only way to defeat these statues is by shooting them with arrows, either one in the head or two in the body, and turning them back into gold. Now that you’ve encountered your first peeled statue keep moving through the palace until you reach the courtyard where Naevia says “you should not be here.”

Upon reaching the courtyard the whispers will tell you to a pond filled with some peeled statues and once you do this the peeled statues will be instantly frozen and turned into gold.

This is another way in which you can deal with hordes of peeled statues. Keep fighting off the statues and jump down into the hole at the back right of the courtyard.

Step #5: Moving through the Caverns and the Rest of the Palace.

The journey continues once you’re down in the hole as you have to traverse through the caverns to find some way back into the palace. Luckily for you, getting back into the palace isn’t too difficult either if you know how and when to use your golden bow.

If you still haven’t figured it out then allow us to tell you. While traversing through the caverns you’ll come across a small opening in the ceiling which can only be reached by shooting the foliage running up the walls right in front of you, turning it into gold and using them as platforms to go up.

Keep continuing down the singular path and eventually you’ll come across another courtyard with a fountain in the middle and at the center of the fountain will be a small golden vase.

Now pay special attention to what we’re about to tell you because this is how you’ll get through all of the courtyards coming up ahead.

The first thing to do is to shoot the vase with an arrow which will cause all of the peeled statues to gather inside the fountain. Allowing you to shoot the water and turn them all into gold in one fell swoop. There might be some stragglers so make sure to deal with them as well.

Get through all of the remaining courtyards in the same way and you’ll eventually come across another palace door which you can then use to once again secure yourself inside the palace walls.

Immediately after you enter the first room you’ll see a key and a note placed on the table in front of you. Pick both of these up and read the note to find that it’s Naevia’s second journal entry (you must have picked up and read the first entry in the initial tunnels to be able read this second one).

Use the key to unlock and open the only other door in this room. You’re so close to the end now. The next task is to get through the final section of the palace while dealing with the peeled statues in a new way.

As soon as you enter the next room the whispers will start telling you to shoot the silk drapes directly opposite to you. Make sure you do this as quickly as possible because it will trap the peeled statues behind the drapes as getting too close would turn them into gold as well.

Now that you know how to trap the peeled statues, move through this area while shooting all the drapes you find to trap all the statues (there should be two more drapes in the same area).

Next, you’ll come across another set of green vines which you’ll have to shoot to use as a bridge and cross to the other side.

Crossing the rest of this area is all about using all the knowledge you’ve learned about your golden bow up to this point and using it to find new ways of moving forward and gilding all the peeled statues in the process, whichever way you prefer.

Climb and jump across some vines, shoot the drapes to trap the statues, and gild the remaining statues with your bow to ultimately reach a balcony style room.

The suspense reaches an all time high once you enter this room as directly opposite you will be a half peeled statue whispering for you to come closer.

As you get closer you’ll notice that this statue is different from the ones you’ve come across up until this point as this one has had more than half of the gold peeled away from it.

Nevertheless, when you get close to the statue, it’ll tell you to look behind and as soon as you turn around you’ll find Naevia standing there and staring at you quite displeased because of what you’ve done to her statues.

So, that is how you get into the palace and find Naevia. Now getting out of the palace depends solely on how you tackle the conversation with Naevia as the conversation can go a total of two ways. If you choose to antagonize you can end up fighting with her which could result in her killing you.