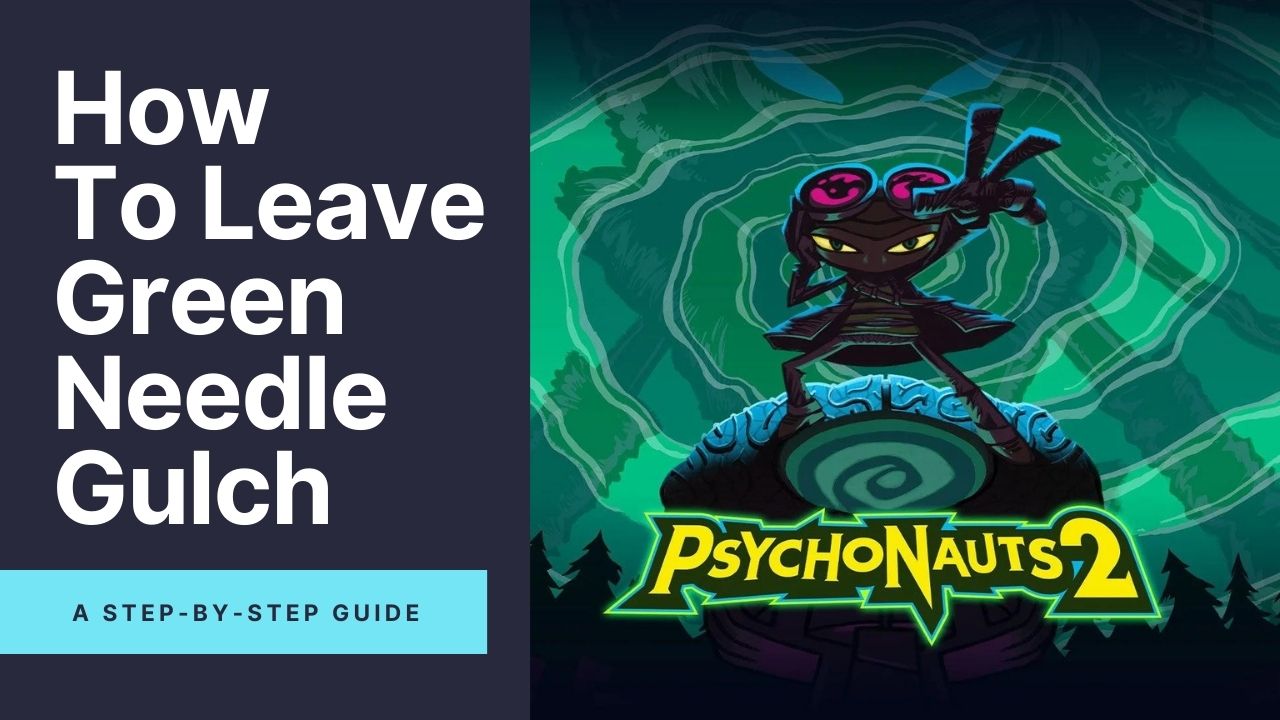 Even though Psychonauts 2 as a game has an exemplary story and engaging gameplay mechanics, the locations or mindscapes in the game can be pretty difficult to navigate due to the maze-like structure of each location. The Green Needle Gulch is one of the most important locations in Psychonauts 2 as a major chunk of the main story goes down in this area.

On top of that, players will find themselves returning to green needle gulch multiple times as the area houses multiple collectables and a unique achievement that can only be unlocked after completing the game.

Where is Green Needle Gulch?

Once you find and enter the motherlobe, the first hub of the psychonaut organization, the green needle gulch is only a short jaunt away from this area. The entire area is basically a swamp filled with thorny bushes, trees and foliage that Raz has to use as platforms to cross over into the next area.

There are also some portals hidden in nearby trees that are only available post-game. As the game will probably tell you when you reach this area, the green needle gulch has plenty of historical significance in Psychonauts 2 as it was the official meeting place of the psychic six which also makes it the birthplace of the psychonauts.

Multiple areas can be accessed through the green needle gulch as well which include Bob’s greenhouse, Lucrecia’s old house and the Heptadome.

How to Leave Green Needle Gulch

1.  Finish the Main Story of the Game

Players will first enter the green needle gulch while playing through the main story of the game which involves fixing ford’s mind.

Before players actually go about fixing ford’s mind they’ll receive a warning from the game. Pay close attention to this warning as this tells you that you can’t exit the green needle gulch until you complete the entire story.

The story itself takes Raz to a bunch of new locations while on ford’s trail. These include the heptadome, the mother lobe and Lucrecia’s old house. Players might even find some hidden fast travel locations inside the green needle gulch but unfortunately, these are inaccessible until you complete the story.

Once you do complete the entire story, you’ll once again start off from the motherlobe and would’ve effectively left a green needle gulch.

2.   Find the Fast Travel Hatch near the Dome

We previously alluded to a fast-travel hatch that was inaccessible while you were in the main story. Well, completing the story means you’ve successfully opened this hatch and can now fast travel to and from the green needle gulch at your convenience.

The only thing left to do is to find this hatch which admittedly is quite a tricky process. This hatch that has a lathe in it can be found in a tree near the heptadome.

Unfortunately, players will have to still search each tree near the dome to find the hatch that leads to a portal which can be used to fast travel away from the green needle gulch.

Furthermore, there is actually another fast travel portal that players can find in a tree stump near the big machine that was used to bring out Maligula in the story, though this one is much harder to find.

3.   Head back Towards the Entrance

Another way to leave the green needle gulch in the post-game is to find the entrance as soon as you’re dropped into the area through the slide.

This is fairly easy to find provided the player knows where to look. If you look immediately to your right as you turn back towards the entrance, you’ll see a bunch of logs that you can cross to find the path that leads back to the entrance.

For all of the completionists out there, there’s also a hidden achievement named the “Return to where it all started” achievement that players can get when they visit Nona’s hut in the post-game and find Ford Crueller and Nona sitting together.

All in all, the final hub of the game, the green needle gulch acts as the perfect setting for the final act of the game. However, navigating the area can be quite difficult and time-consuming which is why it’s understandable that most players would want to know how to leave the area.

But like we’ve said before, players can only leave the area after they’ve completed the story. So, we guess you’ll just have to suck it up and complete the story before you can leave.

Which we reckon shouldn’t be too hard as Psychonauts 2’s story is probably one of the most engaging and interesting video game stories we’ve witnessed in a while. To sum up once again, there are two fast travel hatches that players can leave from post-game. You could also just return to the entrance of the area by crossing over the logs to your right and exiting the area which will lead you to the motherlobe once again.

How to get through Mail Slots in Psychonauts 2