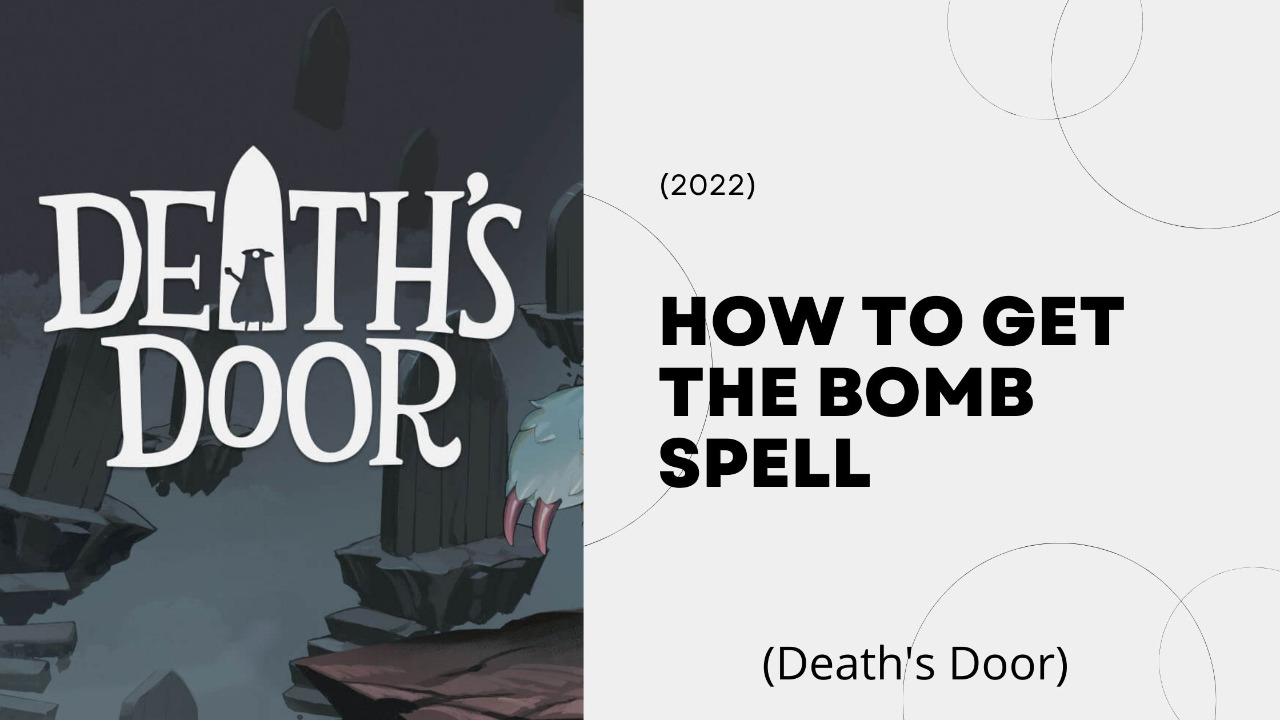 Surviving Death’s Door without any speel is impossible. Besides, even after you unlock the spells, upgrading them is necessary to be more efficient and win fights easily. However, for that, you have to defeat the Silent Servant boss. Today, we will be looking at how to get the Bomb Spell in Death’s Door, and what you can do to upgrade it.

The bomb spell allows you to do many things that would be difficult if it weren’t there. Firstly, it allows you to break the walls easily. Secondly, the upgrade to it won’t even have you take any damage. Thirdly, it will give damage to the enemies. That’s the reason why it needs to be upgraded.

Breaking walls using this spell instead of the bomb flower is much more convenient. The reason is that the flower can still hit you and give some damage. Whereas for the upgraded bomb spell, you won’t take any damage, only the walls and your foes will.

Having said that, let’s see how to get this ability and where to upgrade it.

Getting the Bomb Spell is pretty much straightforward. Though you will have to fight your way through it.

So, to acquire it, head over to the Mushroom Dungeon and enter the ancient soul door. Here, you will have to fight a battle with an avarice chest.

The fight will be tough and you shouldn’t take it lightly. There will be attacks coming from all four directions so your movement and offense will be key.

Anyways, as soon as you take down the avarice chest, the bomb spell will be at your disposal. Now you will be able to use it to break walls and harm your enemies.

However, if the spell is used in close proximity, you will get some damage as well. Though it won’t longer happen once you upgrade this ability.

How to Upgrade the Bomb Spell in Death’s Door

For upgrading the spell, go back to the eastern side of the lost cemetery using the elevator that will lead you there. When at the top of the elevator, go north and take the ladder that is going upward. Now you will be able to see the bridge as shown below.

Go halfway across the bridge and there will be a broken wall from where you can jump down. After doing so, there will be a wall/gate that you can break using the bomb spell and enter to fight the boss.

Plant the seed and go through the shiny door that has the bomb sign on top of it. Here you will have to defeat the silent servant to get the upgrade.

Once you upgrade your skill, it will no longer damage you but only your enemies.

There are four silent servents in the game and all have similar fighting styles except for one or two moves. Similarly, the boss of the bomb spell will put a good fight but will be defeated eventually if you are aware of its moves.

There are all the five attacks that silent servant has alongside the counterattacks to them.

1. Sword Swing: As the name suggests, it will swing its sword towards you. Therefore, as soon as you attack it up close, back away immediately since the sword swing is a ranged attack.

2. Sword Stab: It will stab you with the sword and it is another ranged attack. Your movement needs to be fast in order to avoid it. Just keep moving throughout the fight. Use your rogue daggers and flame spell to counter its attacks.

3. Target Attack: It will hit its sword on the ground and there will be a target coming towards you to slow down the speed. When you will be unable to move, the boss will come toward you to attack. To avoid this, constantly tap the roll button to get out of the hold.

4. Jump Attack: If you standing still, the boss will jump in your direction to attack. Therefore, keep moving all along the fight and never be still.

5. Bomb Attack: Last but not least, it will perform the bomb attack. Here, there will be small targets emerging on the ground where bombs will explode. You need to avoid them.

After every attack, counter with either the flame spell or if you are close then with the rouge daggers. If you manage to keep away from the attack of the silent servant and keep attacking it, it will soon be defeated and you will get the bomb spell upgrade.

So that was how to get the bomb spell in Death’s Door and upgrade it. It is one of the most essential abilities to go past breakable walls and avoid taking any damage. The boss fight for the upgrade is a bit hard though, but it can be won after all. Just keep its attack patterns and tips in mind to defeat it.