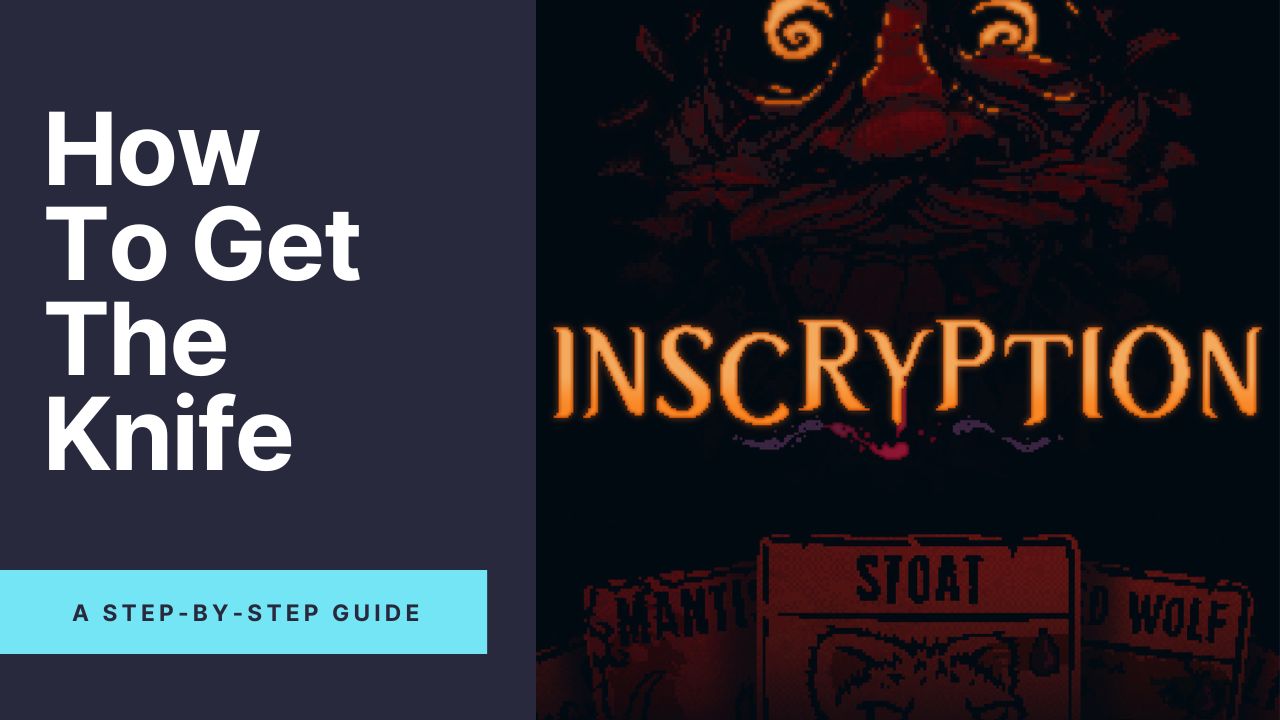 How to get the Knife in Inscryption

Escaping leshy’s cabin is without a doubt one of the trickiest tasks to accomplish in Inscryption. It’s a task that requires each player to complete a plethora of puzzles, card games and other tasks that inevitably lead to you escaping the cabin and moving on in the story.

However, even if you complete most of the puzzles and win most of the card games you won’t be able to leave until you grab hold of the sacred knife in the cabin as it’s essentially a key that you’ll use to leave the cabin.

And unfortunately, players who’ve played the game would know that grabbing the knife is no walk in the park either as it’s a pretty lengthy process in and of itself that requires keen instincts and a sharp mind.

Thankfully, we’ve done all the homework for you and come up with the entire process of how to acquire the knife in this article. So, without wasting any more time, let’s get straight into it.

How to Get the Knife in Inscryption

1.   Solve the Sliding Puzzles in the Dresser and Grab the Caged Wolf Card

We’ll brush right through this part as finding and using the safe’s code is easy enough and the game gives you plenty of hints that’ll help you accomplish the task. The key that you’ll find in the safe will effectively unlock the dresser for you which will allow you to attempt the puzzles inside the contraption.

There are four total puzzles that you’ll need to solve by sliding all the pieces until you come up with a configuration that deals five damage and opens each drawer. Each drawer will contain a unique card that will play an instrumental role in completing the story. The most important one out of all these though is the caged wolf card.

For one, the card has a huge amount of attack power and will become one of the strongest cards in your deck. However, its real power lies in how it can be used to gain access to the prized knife that’s hanging in the cabin.

2.   Free the Wolf Carving from its Cage

If you still haven’t figured it out yet, the caged wolf card has a special use. It can be used to free the wolf carving from its cage which eventually allows you to grab a hold of it.

The interesting part is yet to come though as you have to take this card back to the table at the back of the cabin and play the card game with it.

Make sure you use the card in the game as its defeat will lead to the cage of the wolf carving breaking and freeing the carving that’s been trapped inside of it. After you’ve completed the game, go back to the carving to pick it up and store it in your inventory.

3.   Use the Wolf Carving to Free the Knife from the Squirrel Carving’s Grasp

After placing it you’ll see the wolf attack the squirrel and loosen its grip on the knife. At this point, an ominous message will pop onto your screen that reads “You finally pried my precious dagger from the paws of that squirrel. Though you may wish you hadn’t.”

This message appearing means you’ve successfully freed the dagger and can now equip it in your inventory. But you should know you can only use the dagger once so make sure you think hard about what you’re going to do with it.

Before we go ahead and tell you how you can use the knife in your efforts to escape the cabin, we should tell you that this next section contains heavy spoilers for the definitive part of Inscryption’s story. So, if you’d rather find out what happens to yourself, close this article now! Now that we’ve warned you let’s proceed.

Players can use the knife during a card battle against the leshy at which point your character will use the knife to pull his own eye out and place it on the scales for four extra points. At this point, the game master will give you the option of choosing a replacement eye from his collection.

Players who want to escape the cabin must pick one of the eyes that have floating green lines on them. Equipping this eye will allow players to see a bunch of green runes floating all over the place which are actually hints that will help you get out of the leshy’s grasp.

And there you have it, folks, that’s how you can find and acquire the invaluable knife in Inscryption. Now, it is worth mentioning that you can beat Leshy and escape the cabin without ever using the knife through the use of your other cards and an excellent strategy.

This means getting ahold of the knife is by no means necessary to complete the larger story of the game and escape the cabin. However, players can get a valuable boost to their points tally in the card game by using the knife which eventually makes the whole process of escaping the cabin easier.