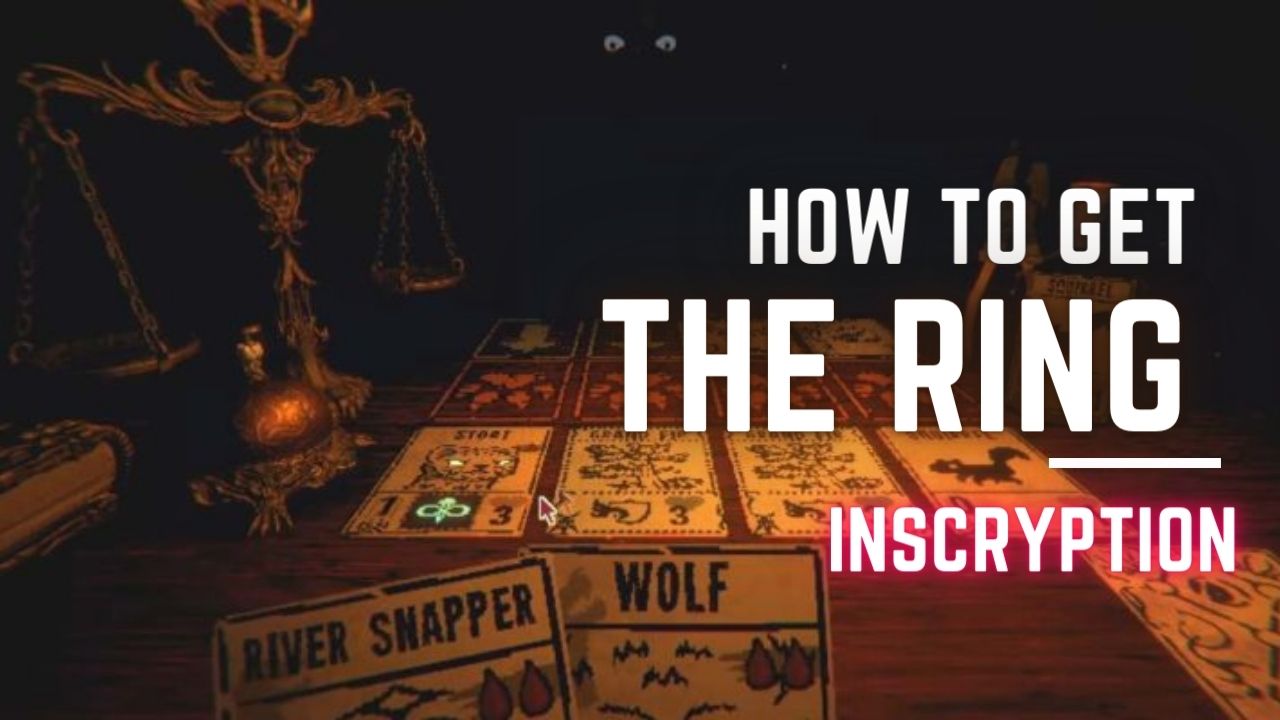 Finding impressive cards, building your deck and dueling it out with all the bosses in Inscryption are totally fine and some of the more enjoyable things you can do in the game. But as the game keeps reminding you, you do have to progress at some point and move towards the next stage of the game.

And to make real progress in the game, you’ll have to uncover all of the secrets hidden in Leshy’s cabin and ultimately escape. One of these hidden secrets is the location of the ring and its use later on in the story. The ring is your reward for completing one of the most difficult puzzles in the cabin, the cuckoo clock.

But in the end, it’s all worth it as the ring can be your ticket out of the cabin if you play your cards right, literally! Thus, without wasting any more time with this intro let’s get straight into how to solve the cuckoo puzzle, get the ring and use it later on in the story.

1.   Using the Replacement Eye to Spot the Cuckoo Clock

The cuckoo clock puzzle isn’t difficult in the traditional way, in fact, the puzzle itself is pretty easy to solve. However, the prep and conditions that a player has to fulfill before he/she can even attempt the cuckoo puzzle is what makes it kind of an annoying task.

For one, you’ll have to complete all four of the lengthy dresser puzzles, use the caged wolf card and release the wolf carving from its cage.

The game master will then offer you a replacement eye. Make sure you pick the green glowy one as it will help you read glyphs and runes that tell you the secrets of the game.

You’ll also have to pick up the bottle containing green goo and use it in battle which will place it on the shelf and allow it to give you that crucial hint you need to solve the upper part of the clock.

Once the eye is equipped you’ll notice the glowing cuckoo clock closer to the back right of the room. Move toward it and get ready to tamper with it as that’s the key to solving the whole thing.

As we said before, once the eye is equipped, solving the puzzle is no big deal as the numbers 11 and 12 on the clock will start glowing green due to the eye and green goo.

Now after moving the hour, minute and second needle multiple times, you’ll eventually end up with your hour hand pointing at 11, the minute hand at 12 and the second hand also at 12.

Once the clock’s hands are firmly placed at these positions, the cuckoo clock will open up and hand you the crucial ring that you need to move forward.

When Does the Ring Come into Play?

Moving forward in the story you’ll eventually have to find a way out of Leshy’s cabin and as the cuckoo clock puzzle is the last puzzle the cabin has to offer there really is no point in lingering on any further.

Also, keep in mind that if you don’t necessarily need to solve the entire clock as only the top half is necessary to advance the plot of the story as that’s the part that supplies you with the ring. Now, in the build-up to your fourth major boss fight, you’ll be put through some trials in preparation for the fight. ‘

Included in these trials will be the ‘trial of the ring’ that just simply asks if you’re wearing a ring. If you have the ring in your inventory at this time then you can immediately pass through the trial in exchange for your ring.

Amazingly, passing the trial comes with its fair share of benefits as you’ll be awarded a bunch of special boons that’ll aid you in your boss battle. These boons, if used wisely, can come in clutch and provide you with the edge you need to defeat the fourth boss.

Using the Ringworm Card Instead of the Ring

For the players who don’t want to go through the hassle of solving the complex cuckoo clock and completing all its prerequisites, we’ve got some amazing news that we just discovered while playing the game ourselves.

While playing through the game for the fifteenth time, we noticed that if you don’t feed the ringworm or Ouroboros cards to the survivors during the battle, then players can use either of the two cards to complete the trial of the ring in place of the ring you get from the cuckoo clock.

Thus, you might want to save up your ringworm or ouroboros card in your next playthrough of the game.

And that boys and girls are how you acquire and use the elusive ring in Inscryption. Of course, we’ve also made the conscious decision of including the fact that the ringworm and ouroboros cards can be used in place of the ring during the trial of the ring.

However, the mental satisfaction of finally completing the cuckoo clock puzzle, even if it is the first part, is worth all the trouble. On top of that, using your hard-earned ring for an immediate pass in the ‘trial of the ring’ just becomes extra sweet. Thus, even though you can opt to use a ringworm card, we’d suggest going after the real deal.

We’d also advise that you complete the entire cuckoo clock puzzle as the bottom part of the contraption also offers some interesting and useful rewards that help you out towards the latter half of the game.