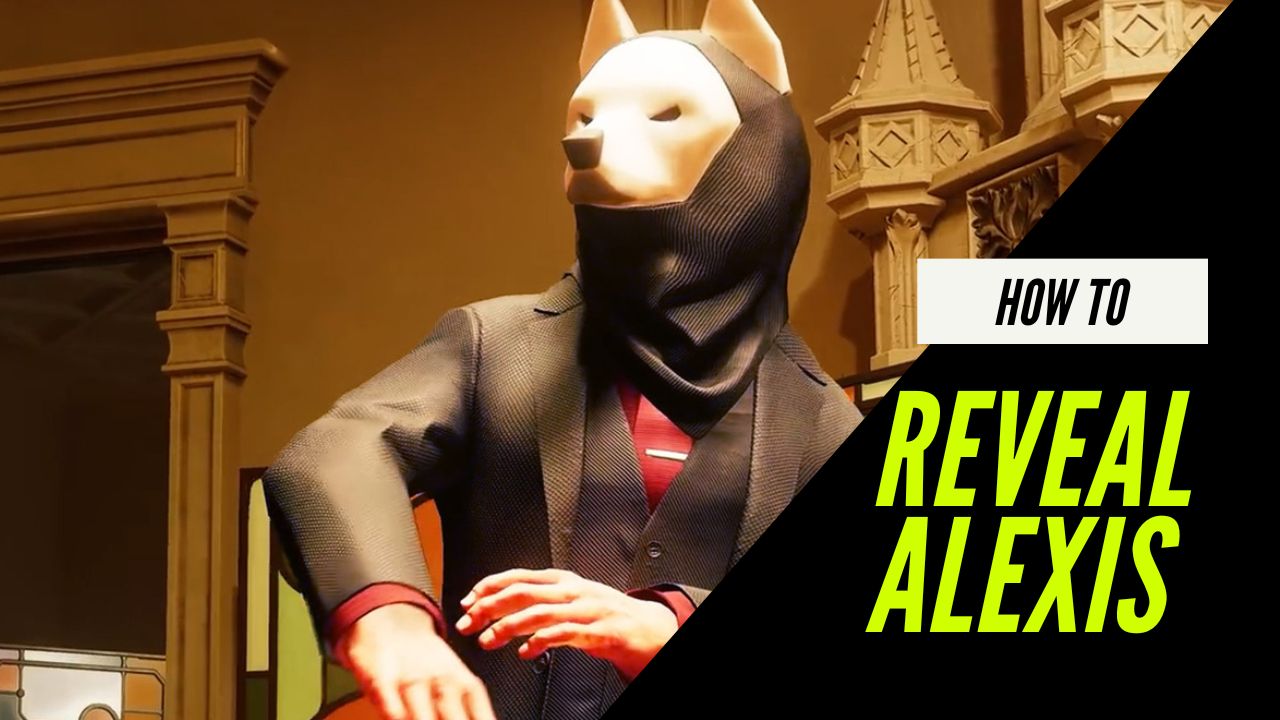 Aleksis is going to be one of the last visionaries that you take out. He will be doing a sort of a party/concert but his identity will be hidden behind a wolf mask. All the people present in the area will be wearing the same mask as well. So, the question is, how to get Aleksis to reveal himself in Deathloop?

Aleksis “The Wolf” Dorsey, commonly known as Aleksis, is one of the visionaries on the Blackreef island. He is a musician and composes different songs from time to time. He is part of the AEON and currently serves as the chief financial backer. He claims himself to be an “Alpha Wolf” and that’s what his fans think of him as well.

Spotting Aleksis can be a difficult task as all you will see are wolf masks in his party at the Dorsey Mansion. There are two methods to get him to reveal himself and both will be detailed below. You can follow anyone that you prefer.

It is recommended to get the Shift slab and Nexus slab before beginning the task. They will help a lot in completing the mission.

Now let’s go through both methods to unmask Aleksis.

Method 1: Get Aleksis to Dance

Aleksis has been recently working on a masterpiece song that he loves a lot. As soon as the beat starts playing, he will start dancing. And no guesses, that’s how you will detect him.

So, we need to get the beat pattern and for that, we will be reaching the toilet of Aleksis as he makes his music there. So, to begin with, enter the mansion from the side which reads “Night Time’s the Right Time”.

Walk through the mountain and go inside. Now take left, walk through the snowy surface, jump over the broken wall, take the stairs and go above. Now you will be on the rooftop. There will be a white door that you need to enter and then swiftly go through the balcony and busy room with the help of ceiling fixtures.

Again, like many situations, there will be an open window. Go through it and take right. There, you can spot a multi-coloured drum machine. You already know that Aleksis makes his music in the toilet as we told you above, but once you are at this place, the eternalists will also be talking about the same thing which you can take as a hint.

Now move out from the door across the turntable. Of course, there’s some protection for Aleksis as two eternalists are present there. Kill them silently or avoid them without making much noise.

Now as soon as you go past the door, turn and look up to spot an open window. This is where the bathroom of Aleksis is. Go through the window using shift or double jump and you will see another drum machine like the one in the room below.

There will be some numbers highlighted on the machine that is random for everyone. There will be four numbers that you need to remember or write down. No simply go back to the room where the second drum machine was and change the beat to the one you saw in the toilet.

Now the latest beat of Aleksis will be playing. No surprise, he will start dancing in front of everyone. Easy pickings now as you have spotted the target. Now it is up to you how you want to kill him.

Aleksis loves his chocolate beer, and stopping its supply means getting him frustrated and going to see what the problem is. And then you can kill him. This method might be a tad easy as you can get Aleksis alone. Contrarily, the first method will help you in spotting the target, but killing him and getting away can still be difficult as he is surrounded by eternalists every time.

Now again, you need to go to the rooftop but don’t enter the white door this time. Rather, go through the open door behind you along the rooftop. Now there will be a total of four guards. Two outside and two inside. After you enter the door, you will be above the two guards that were inside, take both of them out.

This is the place where Aleksis will come alone. If you don’t take out the guards, then they will be there to protect him.

Now after killing them, go towards the ground level of the door and find the small staircase. This leads to our main destination, the brewery.

While walking through the hallway, there will be some landmines and tripwires, so beware. Now out of the brews, look for the one supplying the chocolate beer. Simply turn the crank wheel and the supply will stop. Once Aleksis finishes his glass and goes to fill another one, he will find that the beer is no longer coming.

As a result, he will come down to the basement to check the issue. Now, as soon as he comes, you need to kill him silently. No one will notice it and you can escape successfully.

Rewards for Killing Aleksis in Deathloop

Killing every visionary gives you rewards and trophies. Similarly, once you get rid of Aleksis, the following items and awards will be at your disposal.

There are other rewards associated with Aleksis and his party as well, but they require different techniques to achieve. For instance, the Alpha Burger trophy asks you to kill Aleksis using his meat grinder.

Similarly, the Ghost at the Feast trophy demands killing three targets at Aleksis’ party without being seen.

So, that was how to get Aleksis to reveal himself in Deathloop. Both methods can be utilized and gone through to complete the task. Besides, you will get the Karnesis slab after killing Aleksis which will throw the enemies in the air wherever you want and they can be easily eliminated. A great ability to have for many combats.