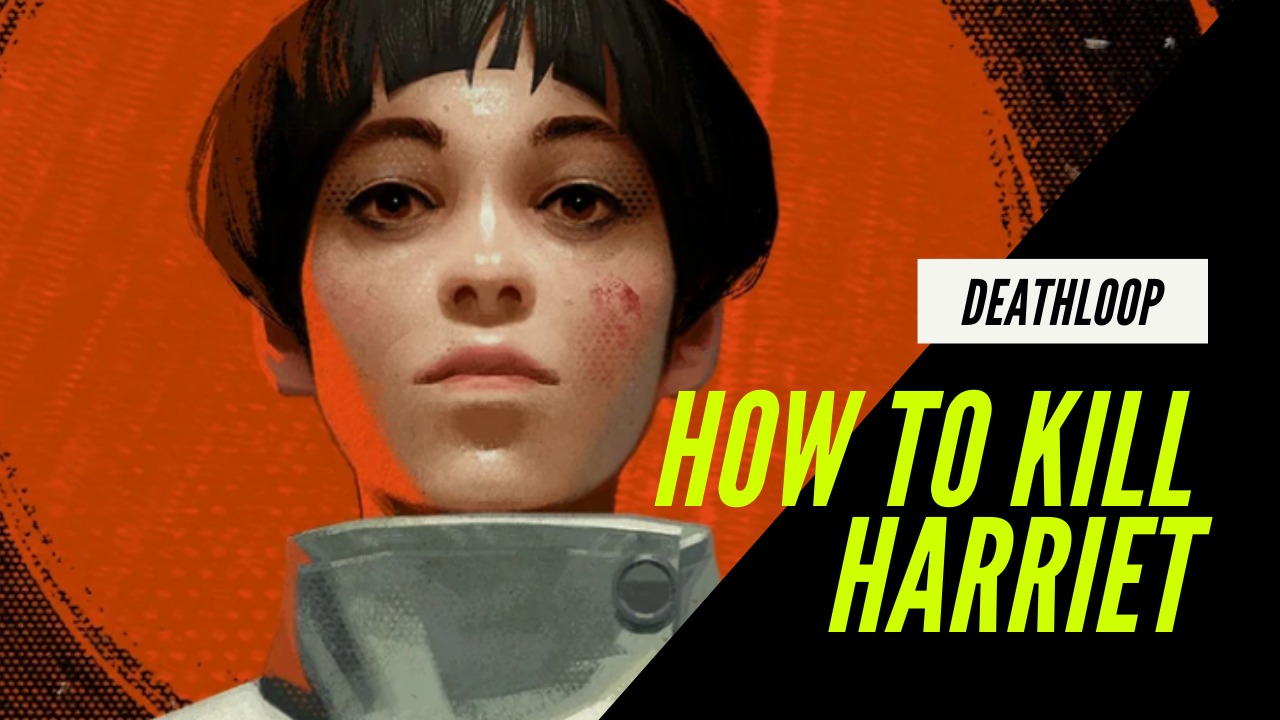 How to kill Harriet in Deathloop has been a hot topic among the players. Some suggest a particular way while others give their own opinions. After all, it is the first visionary that needs to be taken out.

Deathloop features nine visionaries on a hidden island. Eight of them have eternal immortality thanks to the time loop. Colt has to get rid of all of them and take their slabs. If he manages to succeed in doing all of this before midnight, only then he can get out of the loop.

Being trapped in a time loop and having to kill 8 other people to get out of it sure looks like a hectic task. However, it is necessary for survival. Colt – one of the nine visionaries stuck on a hidden island, has a huge task to save his life. The player, as told, has to kill the eight visionaries beginning with Harriet Morse.

How to Kill Harriet in Deathloop by Execution?

To begin with, reach the location of both hangars following the coast in Karl’s Bay. Harriet will be in the second Hanger but you can’t go in it directly. Therefore, enter Hangar 1 and take out the enemies there.

There, you should see a walkway that connects both Hangars. Use it to reach the second one. Harriet will be busy giving her speech. She will be standing in the plane’s cockpit.

Now don’t get over-excited and start shooting her because no bullet will penetrate. You have to patiently make your way through to her.

Firstly, kill the guard on the opposite walkway. Use the Aether Slab while going through the open window across the plane to save Colt from the laser mines. Rather can be obtained by killing Egor or as one of Julianna’s random drops.

If you don’t have Aether, then carefully go past the mines. From here, you can look below and detect Harriet alongside a couple of cultists. Don’t fire just yet. Although you can, it could be bad for you as well. Try to remain detected.

Colt needs to teleport to one of the Aeroplane’s wings and afterward to the side room. Now the moment of truth awaits. If no one has noticed you up till now, then simply get back behind Harriet and begin your morning by killing her.

Wait for her speech to end so the place gets unpopulated. Fewer the people, the easier the task. Even if a fight begins, you won’t be dealing with an entire army. There will be a few cultists and they can be easily taken out. Having said that, the situation shouldn’t reach here.

Once her talk ends, the time for the mission begins. You don’t have to use any weapons here. Simply use execution and the job will be done. Collect the rewards and run away stealthily. No cultist should detect you otherwise bloodshed could begin. It can be difficult on the first and second go, but as soon as you get the grip on killing Harriet, it will be an easy task.

How to Kill Harriet in Deathloop using Poisonous Gas

Once you know how to reach Harriet and bypass every security protocol as well as her guards, the task becomes easy.

We will already be having the poisonous gas weapon with us, so just the methods to use it need to be seen.

Just make sure to not shoot the weapon directly at Harriet and rather fire it on the ground where she is standing. This way, the gas will have more impact and it won’t be long before you’ll be having the Judgement Day achievement.

Here, you are required to give Wenjie’s lab an early visit and unlock the infusion ability. What it does is allow you to keep slabs and weapons permanently i.e between loops.

After you have killed her once, you’ll be having her four pounder. Simply infuse the weapon and in another loop, reach towards Harriet and assassinate her. It’s that simple.

2. Not using the Infusion Ability

Going this way, you will have to reach the infusion chamber again. Afterward, shoot the switch with the special revolver. By doing this, you can keep the weapon without infusing it.

The rest of the process is the same.

This is probably the most convenient method. Though your Nexus Slab ability should be upgraded. If it is already, then reach towards Harriet and do what Nexus does best. Link Harriet along with her seekers.

This will be the game over for her because as soon as she poisons everyone, she will die herself as well. Thanks to the ability we used.

You will be able to gather multiple rewards after executing Harriet. First and foremost is the Nexus power. A brilliant slab that allows you to kill multiple enemies at once by linking all of them together.

Apart from Nexus, you will collect Residuum and the Fourpounder weapon. As discussed above, it will help a lot in killing enemies as well as Harriet herself by simply poisoning them to death. The four pounder will release a certain toxic gas that is enough to kill anyone.

Afterward, whenever you kill the cult leader, you’ll have Nexus upgrades, more residuum, and trinkets. Once the strategy is mastered, it won’t be too hard.

Moreover, these are the two achievements and trophies that you will be getting.

Killing Harriet in Deathloop won’t be much difficult if done with precautions and tactics. There is no need to rush and go guns blazing at everything. Buy your time and take out the secondary foes before eliminating the visionary.