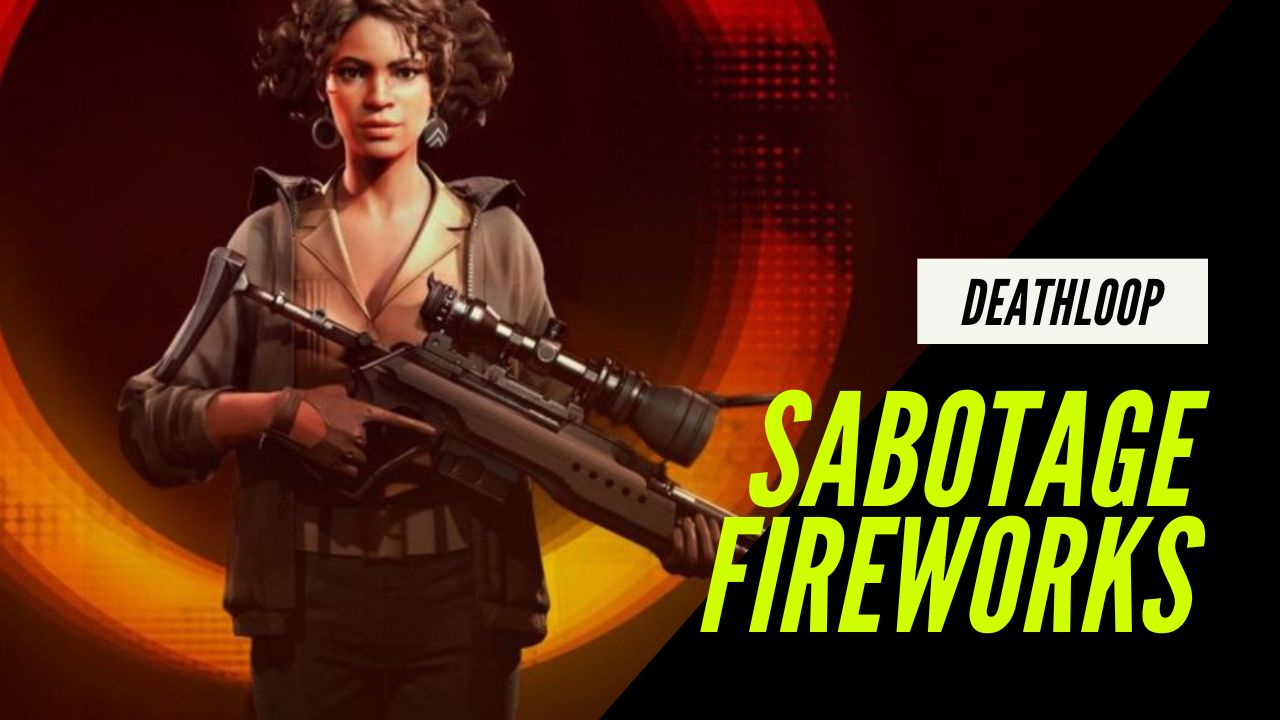 How to Sabotage Fireworks in Deathloop

Colt Vahn in Deathloop has a mountain to climb in order to get out of the time loop he is stuck in. To be precise, the eight other visionaries need to be killed for Colt to get out of the Blackreef island. And one of those missions will require you to find out how to sabotage fireworks in Deathloop.

You will be required to carry out this act to kill Frank Spicer who had been a mobster in the past and dreams of becoming a top musician one day. Currently, he tries to record songs daily but fails and then goes on to host a concert in the evening which has a spectacular firework display included, to say the least.

Be that as it may, these very fireworks are going to his killer. Frank thinks of Colt as his friend and Colt’s wanting to break the loop as a friendship betrayal. To be honest, no one would want to live on such a time loop and therefore, Colt is right at his place.

Now let us give the entire walk-through to sabotage Frank’s fireworks in Deathloop.

How to Sabotage Fireworks in Deathloop?

First things first. The main objective here is to select the right option among the choices available in the lockup located in Karl’s Bay. Now, to begin with, you need to head over to Updaam in the morning.

Going there in the afternoon or evening will be of no use since Otto’s workshop, where we need to go, is open only in the morning and will burn later on.

The shop is located near the library’s entrance. So, as told, the shop will burn down soon after you reach. Therefore, the source of the fire needs to be dismissed to stop the burning from taking place. It’s not that difficult.

Having entered Otto’s workshop, you will hear a machine that is louder than usual. Some cables will be coming out of it leading to the generators attached. You need to destroy every generator there. They are the reason why the shop burns.

Having done this, get out of there and return at noon again. Now you will be able to access Otto’s computer. Now the main task begins. Read Otto’s files and find out their security code Frank. This is what was required all along.

Afterwards, go to Karl’s Bay and at the backside of Hangar 1. Here, you should be able to locate a container. This is where the device is hidden which sabotages Frank’s fireworks. We need to tamper it.

Now you will see four different options after accessing it. We need to select the option that reads “Jam the Rain Flaps”. That’s it, Frank will now die at night and you won’t have to carry out the kill again and again as Frank will be killed every day now.

Lastly, make sure to kill any eternalists that come in between. You might find some of them when going towards the Hangar in Karl’s Bay.

Frank will Drop the Constancy Automatic – A Unique Weapon

The constancy automatic is one of the four unique weapons in Deathloop. It will be dropped off by Frank near his corpse and can be picked up in the morning.

It has a double magazine attached to it allowing it to reload while firing. The magazine size is small though, having 30 bullets. Nevertheless, the dual-magazine covers up for it.

It is a sub-machine gun and can be vital in battles especially due to the shoot while reloading capability.

Apart from Frank, the Constancy Automatic can be randomly dropped by Julianna Blake as well.

Achievements After Killing Frank in Deathloop

You can get the following awards after sabotaging Frank’s fireworks and putting him on his deathbed.

There are other awards as well but the above listed are linked specifically to Frank Spicer.

So, that is all about how to sabotage fireworks in Deathloop. The method isn’t that long and could be done easily if precautions are taken. Frank is one of the visionaries and it is necessary to kill him for Colt to get out of the loop. Unfortunately for him though, his beloved fireworks will be the reason for his death. That’s life, what can you say?